Jiang – who the Chinese referred to as " frog " or " toad " due to his unseemly appearance – also presided over the mass murder of adherents to the Falun Gong spiritual movement and is believed to have personally organized an extrajudicial program to kill, torture, and otherwise crush followers. Widespread evidence of the Chinese Communist Party carving up the bodies of living Falun Gong practitioners to steal their organs emerged during his time in office.

Jiang brutally persecuted all considered a threat to the Communist Party, not limited to students and Falun Gong practitioners but also including adherents of major faiths such as Christians and Muslims . Later in life, he became an internet meme for seemingly mocking current dictator Xi Jinping, yawning and conspicuously sleeping through an important Communist Party Congress speech in 2017.

The Chinese Communist Party announced Jiang's death on Wednesday, attributing it to "leukemia and multiple organ failure." Jiang reportedly died in Shanghai, where he had served as mayor before becoming president and head of the Party in 1993.

The state-run propaganda newspaper Global Times relayed the content of a letter from Party leadership heralding Jiang as "an outstanding leader enjoying high prestige acknowledged by the whole Party, the entire military and the Chinese people of all ethnic groups." It went on to honor him as "a great Marxist, a great proletarian revolutionary, statesman, military strategist and diplomat, a long-tested communist fighter, and an outstanding leader of the great cause of socialism with Chinese characteristics."

Jiang served as head of the country from 1993 to 2003 and was believed to have handicapped the power of his successor, Hu Jintao, by not giving up his title as chairman of the Party's Central Military Commission once Hu became president.

Unlike Jiang, who got away with openly yawning and reading through Xi Jinping's three-hour Communist Party Congress speech in 2017, Hu Jintao, 79, was violently dragged out of this year's Congress in October for unknown reasons as he was sitting inches away from Xi Jinping. Hu has not been seen in public since.

Jiang took over the Chinese presidency in the aftermath of the 1989 Tiananmen Square massacre, in which the Communist Party used tanks and other military equipment to erase a peaceful, pro-democracy uprising in Beijing. The regime made it impossible for the world to know a true death toll for its mass murder, but estimates suggest the communists killed as many as 10,000 peaceful protesters in Beijing on June 4 and in the following days, as reports from the ground revealed that soldiers flooded the hospitals and "emptied" them by killing survivors.

Jiang rose to prominence as the face of the Tiananmen Square massacre, though at the time he was still mayor of Shanghai.

"We do not believe that there was any tragedy in Tiananmen Square," Jiang said in September 1989. "What actually happened was a counterrevolutionary rebellion aimed at opposing the leadership of the Communist Party and overthrowing the socialist system."

Once in power as president in 1993, Jiang prioritized the elimination of any ideologies, religions, or points of view considered a threat to Chinese communism. He focused with particular violence against the Falun Gong, or Falun Dafa, a spiritual movement based on Buddhism that prioritizes meditation, exercise, and healthy living. Jiang became obsessed with the Falun Gong as a potential alternative lifestyle to communism and compared its rise to the Tiananmen Square protests in a June 1999 speech. 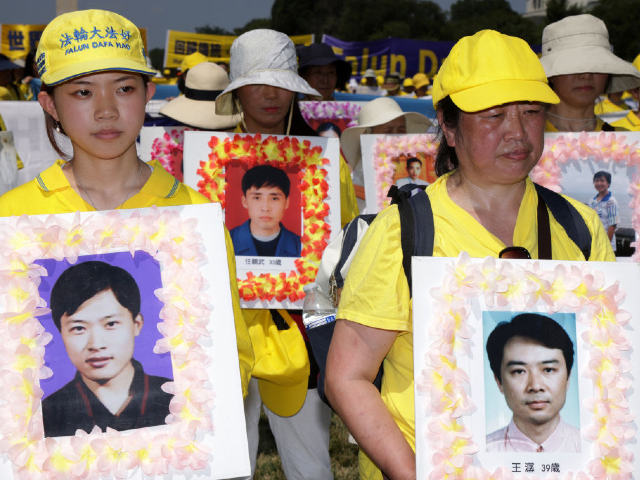 WASHINGTON, DC – JULY 16: Falun Gong practitioners and supporters hold pictures of victims who were persecuted by the Chinese government as they take part in an annual rally and demonstration at the National Mall July 16, 2021 in Washington, DC. Members of Falun Gong held the event against Chinese government's persecution of the group and its practitioners. (Photo by Alex Wong/Getty Images)

"The Falun Gong issue involved deep political and societal contexts and a complex international background. It was the most significant incident since the political turmoil in 1989," Jiang told Party leaders in a speech in 1999. "We must treat it seriously, do thorough research, and take effective countermeasures."

"I have to make it very clear the Falun Gong is an evil cult," Jiang famously said two years later.

"Former Chinese Communist Party General Secretary Jiang Zemin personally launched, planned, and executed control over the 'douzheng' crackdown on Falun Gong," the China Tribunal, an independent research project intended to compile evidence on human rights abuses in the country, revealed in its report on the persecution.

The most gruesome aspect of the persecution of Falun Gong under Jiang was the widespread evidence of live organ harvesting – a practice in which healthy people are killed to cut out their organs and sell them. Anonymous former Chinese government officials have named Jiang as personally ordering the practice, of which there was evidence against Uyghur Muslims a decade before.

Evidence surfacing as recently as this April suggests that the Chinese Communist Party continues to use political prisoners as involuntary organ donors and practice execution by organ harvesting.

Jiang's term as president was also marked by a close friendship with his American counterpart at the time, President George H.W. Bush. Prior to Jiang becoming president, in the year of the Tiananmen Square massacre, Bush's brother Prescott signed a lucrative deal to build a golf club in Shanghai, where Jiang served as mayor, resulting in a blossoming friendship. 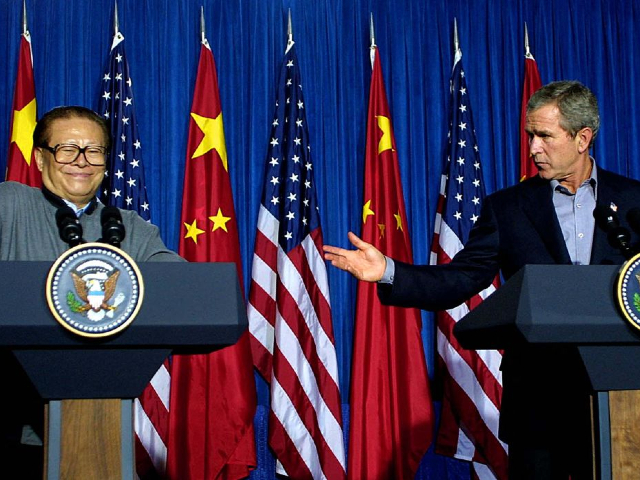 "The mayor of Shanghai during negotiations for the golf course, Jiang Zemin, became a Bush family friend who later became the premier of China," investigative journalist Peter Schweizer revealed in his 2022 book Red-Handed: How American Elites Get Rich Helping China Win .

Prescott Bush later publicly pressured his brother's government not to sanction China over the Tiananmen Square massacre. Jiang Zemin, meanwhile, continued his friendly disposition towards the family into the presidency of son George W. Bush. The younger Bush visited with Jiang in 2002, amid a bloody wave of repression in China against Christians.

Left-wing outlets in America have reported on Jiang's death by crediting him with "a decade of meteoric economic growth," the rise of China "as a global superpower," and the steward of "history-making changes including a revival of market-oriented reforms."

Chinese Ex-President Jiang Zemin, Who Justified Tiananmen Massacre, Dead have 1332 words, post on www.breitbart.com at November 30, 2022. This is cached page on TechNews. If you want remove this page, please contact us.