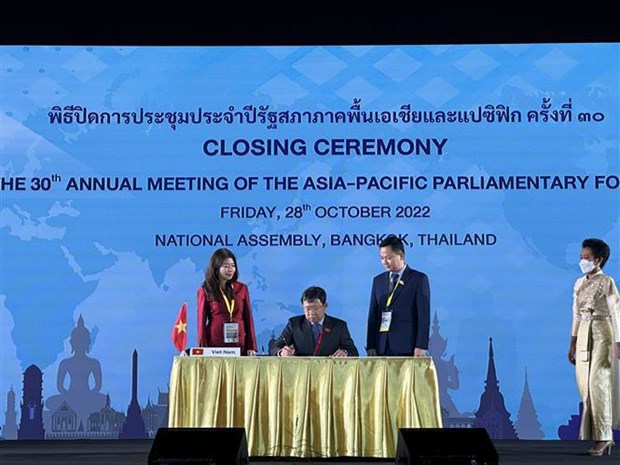 The 30th meeting of the Asia-Pacific Parliamentary Forum (APPF) concluded in Thailand on October 28. (Photo: VNA)

Bangkok (VNA) – Chairman of the Vietnamese National Assembly ‘s Committee for External Relations Vu Hai Ha suggested countries enhance trust building and respect for each other’s sovereignty, political institutions and legitimate interests while addressing a session of the 30th meeting of the Asia-Pacific Parliamentary Forum (APPF) that concluded in Thailand on October 28.

He also proposed nations strengthen cooperation to ensure peace, stability and law respect at seas and oceans, saying the East Sea should be maintained as a sea of peace, cooperation, security, safety and freedom of navigation and overflight on the basis of respecting basic principles of the United Nations Charter and international law, including the 1982 UN Convention on the Law of the Sea (UNCLOS).

Ha called on the APPF member countries to carry forward their roles in building and ensuring the enforcement of international commitments and laws relating to peace, security and development in the region, while urging governments to work to improve the efficiency of cooperation in containing the COVID-19 pandemic, and preventing and addressing traditional and non-traditional security issues.

The legislator also briefed participants on the Vietnamese National Assembly's performance in parliamentary diplomacy, saying it has raised recommendations to consolidate the peaceful environment in the era of innovation and technological reform.

The meeting issued a joint declaration which stresses the need to promote parliamentary diplomacy, and boost green economy and digital economy, for sustainable recovery, and for peace and prosperity in the region.

On the sidelines of the meeting, Ha, head of the Vietnamese delegation, met with President of the Thai National Assembly Chuan Leekpai, and paid a courtesy visit to the Chairman of the Lao National Assembly Saysomphone Phomvihane.

He also had bilateral meetings with delegations from Canada, Cambodia, Australia and New Zealand.

During the meetings, Ha spoke highly of the relations between the Vietnamese legislature and its foreign counterparts, and expressed his hope for stronger ties in the time ahead./.

Vietnam calls for enhancing trust building at APPF’s 30th meeting have 539 words, post on en.vietnamplus.vn at October 29, 2022. This is cached page on TechNews. If you want remove this page, please contact us.