New York's Mayor Eric Adams wants the rest of America to pay $500 million for housing the many thousands of foreign workers and renters he is providing to New York's business leaders.

City Hall privately asked the White House for the emergency cash midway through the summer, saying it would cover just one year's worth of spending on the migrants who Adams has said are straining the city's shelter system to its "breaking point," The Post has learned.

The request comes as House Democratic legislators, including Rep. Adriano Espaillat (D-NY), are pleading for another $500 million for "New York City and other safe-haven cities." 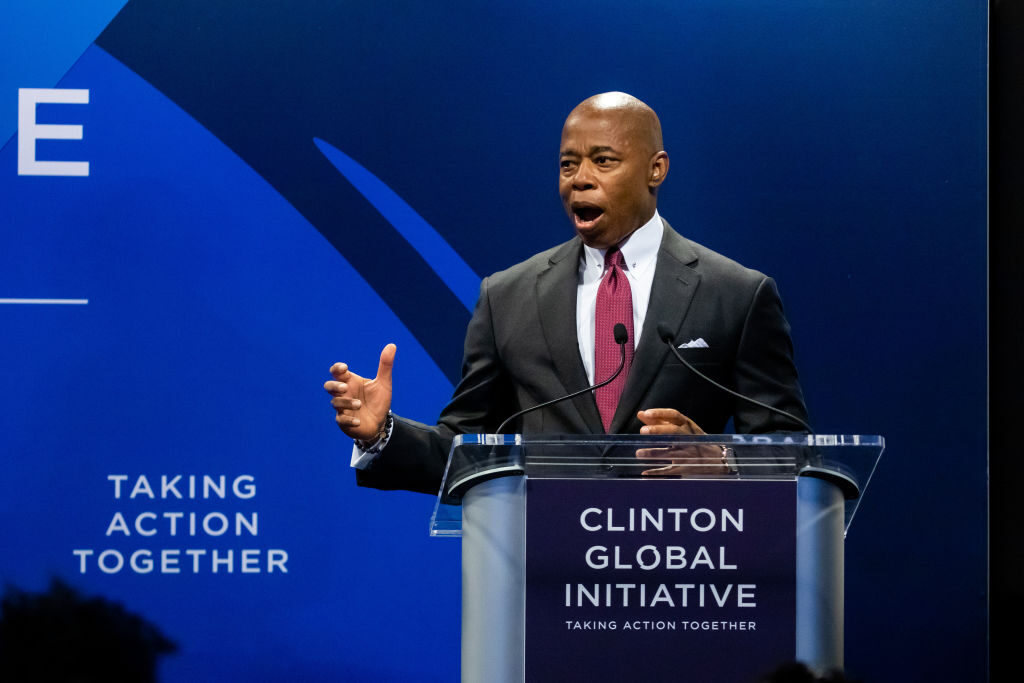 The economic and pocketbook impact of migration is made clear by California. That state's huge inflow has increased California's population by at least 33 percent and has sharply increased competition for housing amid deepening economic inequality , drug addiction, and homelessness.

In California, the median price of a house is $725,000 , according to NeighborhoodScout.com. That price is three-and-a-half times as much as in 2020, the site said.

The same process is underway in New York. For example, rents are also very high in New York partly because the local elite welcomes, protects, and subsidizes illegal migrants at the expense of ordinary New Yorkers.

This self-serving support for Extraction Migration is rationalized by elites who tout the 1950s narrative that the United States is somehow a "Nation of Immigrants."

Biden's migration has boosted the number of migrants who have filed asylum claims to stay in the United States by up to 750,000, according to the Washington Post .

The migrants are concentrated in a few coastal states.

Roughly 408,000 migrants — or 54 percent — of the 750,000 are in the four states of California, New York, Texas, and Florida, even though those states comprise only 33 percent of the population, according to the September 26 report in the Washington Post .

New York City Mayor Eric Adams (D) said Texas Gov. Greg Abbott's (R) program busing migrants to New York City is "hateful politics" that is "taking away the respect and dignity of people who are in need" and "just so anti-American." https://t.co/zxZAyIz1Qf

"The largest remaining groups are mostly awaiting hearings in courts in blue states such as New Jersey, Massachusetts, and Maryland, though some are waiting for hearings at courts in red states," the Post added.

The government's legal visa-worker programs are also skewed towards coastal states, further reducing the incentive for Silicon Valley to invest in heartland states.

GOP legislators have begun to recognize how government-funded migration to the coastal states aids wealthy people in those states and also redirects private investment that would otherwise be shared with people in their states. For example, Bloomberg Government reported on September 21.

[The] Biden administration should be looking for ways to deter migration "instead of asking for more money for more people to come," Sen. Shelley Moore Capito (W.Va.), the top Republican overseeing DHS's budget, said Tuesday. "So yeah, I got a problem with that."

But funneling money to border needs is a point of frustration for many Republicans, who instead want President Joe Biden to return to many of the immigration policies of his predecessor: continuing border wall construction, forcing asylum seekers to wait in Mexico while their claims are reviewed, and applying pandemic-related restrictions more aggressively.

"It's not the answer to our immigration problem, it's not just more money," Rob Portman (Ohio), top Republican on the Senate panel that oversees DHS, said of the emergency funding push.

But the GOP opposition is well-timed.

Border crossers arriving in New York City on migrant buses sent from Texas by Gov. Greg Abbott (R) are being awarded healthcare services as well as free cellphones, among other things. https://t.co/0egilSfD1A

Biden's deputies are running short of the cash they need to operate their northside transportation networks used to quietly transport economic migrants from the border to workplaces and apartments in American cities.

On September 15, 10 Democratic senators asked Capito and other legislators on the appropriations committees to keep the migrant pipeline working:

Funds appropriated through FY 22 [which ends October 1] are quickly being drawn down and in the absence of full-year funding, grantees of the program are currently grappling with how to continue to provide critical services to this vulnerable population. Communities and organizations are on the front-lines of assisting migrants coming to our border and resources are being stretched thin as they take on the role of performing a federal government function. This funding is vitally important as more cities in the United States receive refugees and asylum seekers.

Any extra federal spending would be smuggled to the various cities via an increase in funding for the Department of Homeland Security (DHS), the Department of Health and Human Services, and other agencies. Much of the money flows through the DHS to progressive groups via contracts with the Federal Emergency Management Agency.

The northside smuggling network — and the record number of migrant deaths —  has largely been ignored by the corporate media.

That corporate policy leaves many Americans in the dark about the scale of Biden's mass migration — but also awash in the media hand-wringing about the claimed trauma suffered by migrants who were flown to the elite playground of Martha's Vinyard.

If the GOP holds fast, they will likely win concessions from the Democrats' pro-migration leaders, including Majority Leader Sen. Chuck Schumer (D-NY).

However, those concessions may benefit the GOP's business donors, not the millions of Americans who are being sidelined by the establishment's preference for uncomplaining immigrant workers and renters.

Many progressives compete to display their support for the migration that makes them and their children poorer : "Blue areas are already dealing with a large proportion of migrants who are seeking asylum and have for a long time," said the author of the Washington Post article who posted the numbers showing the skewed distribution of migrants.

But few progressives want to recognize the macroeconomics of migration .

New York Wants $500 Million from Americans to House New Migrant Workforce have 1401 words, post on www.breitbart.com at September 27, 2022. This is cached page on TechNews. If you want remove this page, please contact us.