WASHINGTON, DC – The Supreme Court is expected in the next seven days to hand down five major decisions, three of which will be huge, and potentially material for the history books –on abortion, the Second Amendment, and religious liberty.

The Supreme Court's term begins the first Monday of October, and officially lasts until the date of the next term's October start date. But the court's term as a public matter usually ends in the final week of June, which is to say next week.

This year is unusual in the number of extremely consequential cases it has. This week the court held in Carson v. Makin that Maine violated the First Amendment's Free Exercise Clause by excluding Christian school choice from a school aid program. But with Carson decided, fully five of the court's 13 remaining cases are also major cases.

One is Biden v. Texas , about President Joe Biden's attempt to shut down one of former President Donald Trump's signature policies, the Migrant Protection Protocols (MPP), better known as "Remain in Mexico," without which the number of illegal aliens making it into this country would be far higher.

A second is West Virginia v. EPA , about whether Biden's EPA has almost unlimited authority to issue sweeping environmental regulations that could transform the American economy.

Those are both very important issues, but could be eclipsed by the remaining three in terms of legal significance. One at least should be nothing short of historic,.

One is New York State Rifle & Pistol Association v. Bruen , about whether the Second Amendment right to keep and bear arms extends outside the home. The only two major gun rights cases decided by the Supreme Court involved citizens who wanted handguns at home for self-protection, and now the court will consider how that right applies as citizens go about their daily lives.

Another is Kennedy v. Bremerton School District , about a former U.S. Marine high school football coach who was fired by a public school for his custom of offering a short, silent prayer on his team's football field after each Friday night football game. This case could be a major ruling on three separate First Amendment issues: free speech rights in schools and/or for government employees, the right to freely exercise religion for government workers, and the proper meaning of the Constitution's Establishment Clause, which forbids the government from adopting an official religion. 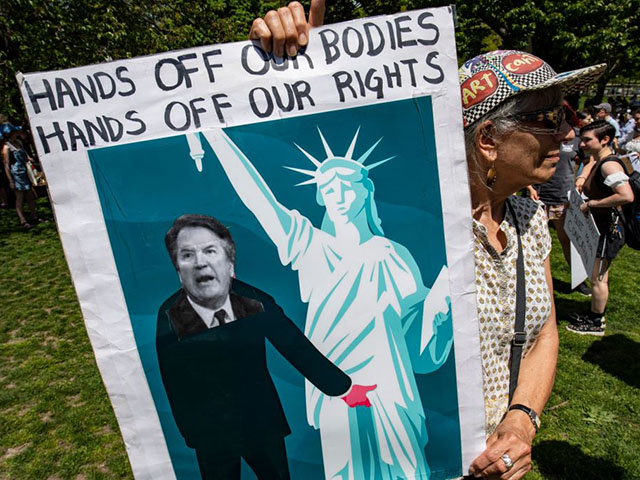 An activist carries a placard with an image of US Supreme Associate Justice Brett Kavanaugh during a Planned Parenthood Pro-Choice Rally in Boston, Massachusetts, on May 14, 2022. (JOSEPH PREZIOSO/AFP via Getty Images)

Finally – of course – is Dobbs v. Jackson Women's Health Organization , challenging a Mississippi ban on abortions after 15 weeks, in which it now looks like a majority of the Supreme Court is willing to overrule Roe v. Wade by holding that the Constitution does not include an implied right to abortion. One way or the other, Dobbs will feature prominently in history books concerning this period of time in America.

The court is currently scheduled to release more decisions this Thursday and Friday, as well as next Monday.

Ken Klukowski is an attorney who served in the White House and Justice Department, and is a Breitbart News contributor. Follow him @kenklukowski.

Historic Supreme Court Decisions Loom on Abortion, Guns, Religion have 808 words, post on www.breitbart.com at June 23, 2022. This is cached page on TechNews. If you want remove this page, please contact us.