The World Health Assembly (WHA) in Geneva moved away from debating a "global pandemic treaty" on Thursday to pass a motion condemning the regional health emergency caused by Russia's invasion of Ukraine.

The WHA considered two dueling motions: one submitted by the U.S. and 50 other member states of the World Health Organization (W.H.O.) that condemned the Russian invasion, and another introduced by Moscow that held Russia blameless for the regional health crisis.

Ukrainian Ambassador to the United Nations Yevheniia Filipenko denounced the Russian resolution as a "twisted alternative reality" and a "cynical attempt to deceive this forum."

The Russian bid to deflect blame was backed by its fellow tyranny, China, but otherwise had little support. It was rejected by 66 votes to 15. U.S. ambassador Sheba Crocker needled the Russians for lazily copying huge chunks of text from the original resolution and simply erasing every line that mentioned Russia.

The U.S.-backed proposal blaming Russia for the health crisis passed 88-12, but W.H.O. has 183 members with voting rights, so almost half of the body abstained from voting.

"Diplomats said this time they were wary of pushing Russia too far and prompting it to quit, given the need to cooperate with WHO on disease surveillance. Support for political condemnations of Russia has also faded, they said, with Western countries seen by some as too narrowly-focused on targeting Russia at the expense of other issues," Reuters reported . 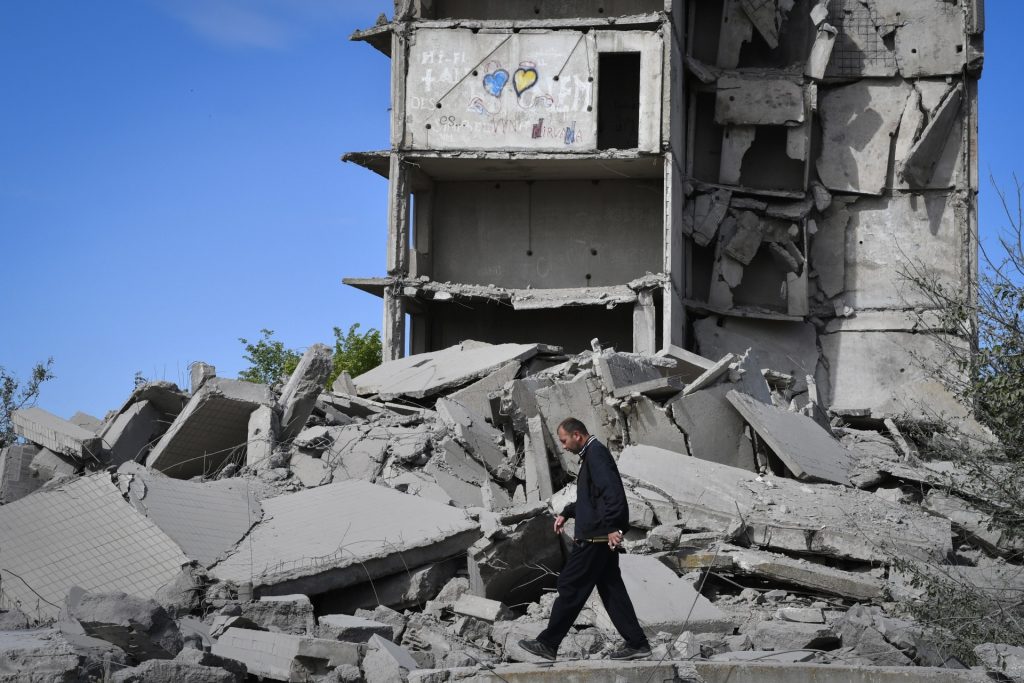 A local resident walks next to a house destroyed in a Russian shelling in Kramatorsk, Ukraine, Wednesday, May 25, 2022. (AP Photo/Andriy Andriyenko)

It is possible for W.H.O. to remove a member state's voting rights, as in the case of South Africa, which lost its vote for about 30 years due to apartheid even though it was a founding member of the World Health Organization.

The Russian government threatened to withdraw from W.H.O. last week and technically took the first steps toward doing so. In addition to the resolution condemning the invasion of Ukraine, Russia was angered by a European-sponsored W.H.O. resolution that would relocate a regional disease office out of Moscow.

"Any attempts to isolate or to blame the Russian Federation specifically for the health situation in the country is unacceptable. Russia is bringing peace to Ukraine," thundered Russian deputy ambassador Alexander Alimov after the vote on Thursday.

"War is a health issue. Health for peace. Peace for health. The World Health Assembly must not be afraid to address health crises, including the cause and, in this case, the aggressor," responded British representative Simon Manley.

The resolution condemned Russia's "military aggression against Ukraine, including attacks on healthcare facilities," in the "strongest terms."

W.H.O. called on Russia to "immediately cease any attacks on hospitals," protect medical and humanitarian personnel in the conflict zone, and ensure the free flow of medical supplies.

W.H.O. said the Russian invasion was severely impeding access to medical treatment in Ukraine and causing health care issues across the region.

A report filed by W.H.O. Director-General Tedros Adhanom Ghebreyesus on Thursday listed 256 attacks on health care facilities in Ukraine since the Russian invasion began in February, 212 of them involving heavy weapons. 75 people were killed in these attacks.

Ukraine Overtakes Coronavirus, Pandemic Treaty as Main Debate at World Health Assembly have 750 words, post on www.breitbart.com at May 27, 2022. This is cached page on TechNews. If you want remove this page, please contact us.