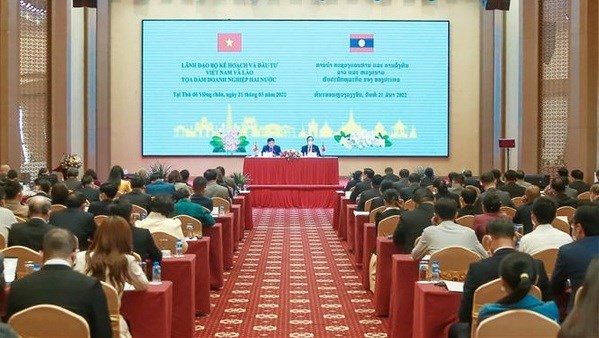 An overview of the event (Photo: VNA)

Vientiane (VNA) – Vietnamese and Lao businesses discussed ways to speed up the implementation of large-scale Vietnamese-invested projects in Laos and seek new cooperation projects of strategic importance during a workshop in Vientiane on March 21.

The event, co-chaired by Vietnamese Minister of Planning and Investment Nguyen Chi Dung and his Lao counterpart Khamjane Vongphosy, was part of efforts to promote the economic partnership and connectivity between the two countries and implement directions given by the Vietnamese and Laos Prime Ministers at the 44th meeting of the Vietnam-Laos Inter-Governmental Committee on bilateral cooperation and at their meeting in Hanoi on January 10.

At the event, businesses of both sides highlighted the advantages and difficulties during the investment process in each country, while giving a number of proposals and solutions to leaders of ministries, sectors and localities on how to facilitate the bilateral partnership.

Noting down the proposals, Minister Dung said that in order to promote investment cooperation between the two sides, it is necessary to focus on five major groups of solutions, including maintaining macro-economic stability, forming a stable and transparent legal corridor, building a smooth business environment and reinforcing investors' confidence during the implementation of projects in Laos.

At the same time, the two sides should design special policies for major projects that have strategic significance to the bilateral economic cooperation, while striving to approach development partners to mobilise resources for large-scale cooperation projects and projects that help increase infrastructure connectivity between the two countries, he said.

The minister underlined the need for the Lao side to focus on removing difficulties facing a number of large-scale projects, while ensuring the legitimate rights and interest of Vietnamese investors. Vietnam and Laos should effectively coordinate in the framework of the ASEAN, the Regional Comprehensive Economic Partnership (RCEP) and the World Trade Organisation (WTO), he said, stressing that the two countries should pool resources to speed up investment projects. He advised investors to uphold their social responsibility by creating more jobs, protecting the environment and engaging in social welfare activities in Laos , thus building a good image of Vietnamese investors in Laos and Cambodia. 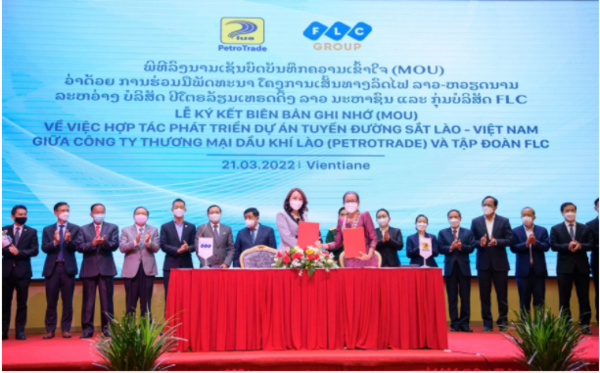 Under the MoU, FLC and PetroTrade will work together to prepare for the construction of the section from Vung Ang seaport in the central province of Ha Tinh to Cha Lo border gate in Quang Binh of the Vientiane-Vung Ang railway project. This is an important section of the Vientiane-Vung Ang railway route that has total investment of about 5 billion USD. The project is scheduled to start in the fourth quarter of this year.

The railway system connecting Laos and Vietnam is expected to improve the goods transit capacity in Vung Ang port, thus strongly facilitating trade between Vietnam and neighbouring countries and strengthening the regional and international connectivity. Once completed, the project is hoped to increase opportunities for Vietnamese and Laos firm to partner in promising areas such as tourism and services.

FLC Group also proposed that the Lao side create favourable conditions for the firm to invest in projects in golf-resort, aviation and mining areas.

Meanwhile, T&T Group and Phongsubthavy Group also signed an agreement on an energy project in the Vietnam-Laos border area./.

Vietnamese, Lao businesses work to speed up strategic cooperation projects have 736 words, post on en.vietnamplus.vn at March 21, 2022. This is cached page on TechNews. If you want remove this page, please contact us.