Rep. Mike Gallagher (R-WI) blasted the Biden administration's attempt to pin its failures with Iran on the previous administration while warning of the possibility of a "complete collapse of American deterrence" due to its refusal to stand up to the Islamic regime.

In a video clip posted on Monday, Wisconsin Republican Mike Gallagher took issue with President Joe Biden and his administration for an array of failures since taking office, as he expressed particular concern over Iran.

Rep. Gallagher discusses the Biden Administration’s attempt to pin its failures with Iran on the Trump Administration and warned how failing to stand up to the terrorists in Tehran will further damage American deterrence. pic.twitter.com/5yuAA3UAWe

Recalling President Biden's inaugural address nearly one year ago, in which he stated, "my whole soul is in this — bringing America together, uniting our people," Gallagher claimed the president indeed managed to further unite the country "against himself and his agenda" this past week.

"The latest polling numbers show almost 70% of Americans do not approve of the job that Biden is doing," he said.

"It is very difficult to unite 70% of Americans around the idea that the sky is blue," he added, "but, yet, Biden has done the impossible."

Noting the failure abroad during the August withdrawal from Afghanistan as well as domestically in combating COVID-19, Gallagher declared that the president had "failed the commander-in-chief test."

"Whether it's the disgraceful retreat in Afghanistan, whether it is the complete failure to shut down the pandemic, whether it is these pernicious lies about voting rights, just complete gaslighting on display, he has given Americans something they can all agree upon, which is that he has failed the commander-in-chief test," he said.

Gallagher urged Americans to realistically consider whether the president would readjust his policies or continue to govern "from the radical Twitter-obsessed left."

"So now the question I think all Americans have to ask themselves now is: Will President Biden do what is necessary to turn this thing around and start governing from the center, as opposed to governing from the radical Twitter-obsessed left?" he said.

"Or are Biden's handlers so entrenched in their delusional self-regard that they can't admit that they've been wrong? If that's the case, then this can actually get worse," he added. "I genuinely hope that's not the case."

Calling a "strong, sharp, energetic president" something that is in every American's interest, he lamented that such leadership is currently lacking.

"I think it's in the interest of all Americans to have a strong, sharp, energetic president, regardless of which party he or she belongs to," he said. "We don't have that right now and that's a problem."

"And I fear that emerging crises are going to further test this feeble, confused administration," he added.

Noting the current friction with both Russia and China, he highlighted his particular concerns over Tehran. 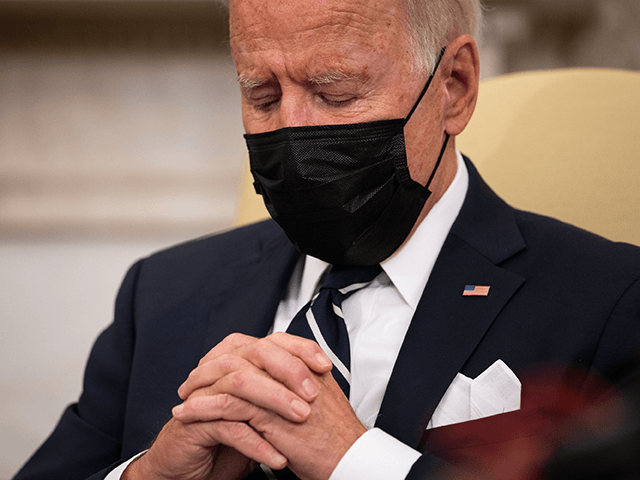 U.S. President Joe Biden listens during a meeting with Israeli Prime Minister Naftali Bennett in the Oval Office at the White House on August 27, 2021, in Washington, DC. During their first face-to-face meeting at the White House, US President Joe Biden and Israeli Prime Minister Naftali Bennett focused their talks on Iran. (Pool Photo by Sarahbeth Maney-Pool/Getty Images)

"There's a lot of gloating going on right now in the Iranian press by their officials, which suggests that something is coming," he added. "And my guess is we're going to see some sort of interim agreement, which the administration has floated."

Gallagher deemed such capitulation to the Islamic theocracy a "total cave."

"You can imagine they agree to stop 60% enrichment or something, and we pay them a lot of blood money in return, which would be a total cave," he said. "But you can bet that whenever the Iranians are bragging, and our side hides behind these phrases like, 'many details remain to be decided,' it's time to hide your wallet."

He also claimed that regarding global issues and particularly the issue of Iran, the Biden administration "seems to believe that diplomacy is an end, in and of itself," and not a means to a lasting goal.

"It's like they want to live in this Model UN world where everything is solved with sternly worded press releases and diplomatic deals in Geneva," he said, "and unfortunately, that's not the world we live in."

"Davos is not the real world. We live in a world where — or at least in certain parts of that world — where hard power is still paramount," he added. "And if you're not willing to fight, if you don't have a credible military deterrent, your enemies are going to walk all over you."

Claiming "we may have witnessed the collapse of the Biden presidency," Gallagher concluded by expressing his hope that "we don't see the complete collapse of American deterrence."

Rep. Gallagher's warnings come amid heightened tensions between Iran and the West over failing nuclear deal negotiations, as President Biden and his administration attempt to renew the Iran nuclear deal of 2015, which offered Iran sanctions relief in return for promises not to enrich uranium beyond a certain level, though only for a limited period.

Iran, the largest state sponsor of terrorism worldwide, claims its nuclear program is for energy purposes but world leaders, including the six nations that joined the 2015 deal to limit Iran's nuclear weapons capacity, say enriching uranium may lead to Iran's ability to quickly create a nuclear weapon.

The Obama-led nuclear deal — deemed fatally flawed and highly one-sided by many, and from which then-President Donald Trump withdrew in 2018 — delineates an enrichment limit of 3.67 percent. 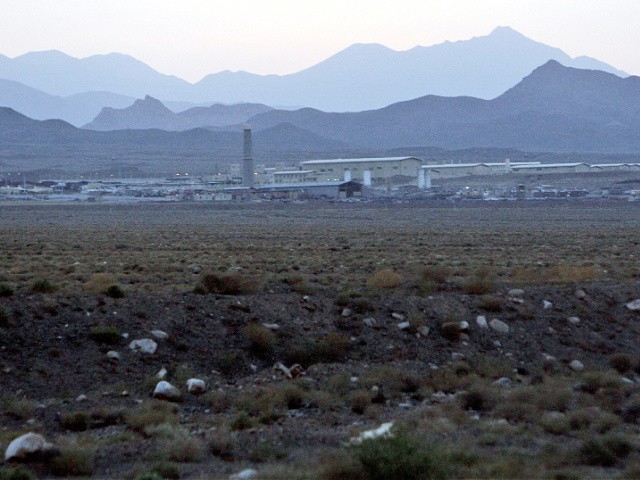 Iran has been accused of violating the agreement as Tehran produces more enriched uranium.

Recently, the International Atomic Energy Agency told member nations in its confidential quarterly report that Iran has an estimated stock of 39 pounds of uranium enriched to up to 60 percent fissile purity, an increase of almost eight kilograms since August.

Nevertheless, current nuclear talks in Vienna may see the United States and other world powers provide Iran with economic sanctions relief in exchange for temporary restrictions on its nuclear program.

In October, U.S. special envoy for Iran Robert Malley warned that Iran successfully achieving nuclear capabilities in the near future is a realistic scenario.

"We have to prepare for a world … where Iran doesn't have constraints on its nuclear program," he said, adding that options are being considered to "deal with" such a scenario even as the Biden administration seeks a return to the Iran deal.

Rep. Mo Brooks (R-AL), along with Republican colleagues, blasted President Biden and his administration for displaying weakness in its relations with Iran, having "inexplicably" removed sanctions from Iranian missile producers, and for "empowering" terrorists.

In December, former U.S. Secretary of State Mike Pompeo boasted of the Trump administration's bringing Iran "to its knees," while warning the Biden administration is seeking to "reverse the historic progress we brought to the Middle East."

Rep. Mike Gallagher Warns of ‘Collapse of American Deterrence’ over Iran have 1606 words, post on www.breitbart.com at January 19, 2022. This is cached page on TechNews. If you want remove this page, please contact us.