(AFP) — Only a few times a year Ninos Josephides, a Greek Cypriot, is allowed to visit his home village in the Turkish-occupied part of divided Cyprus. But he can't visit his house. It was destroyed long ago.

In the aftermath of a visit by Pope Francis last week, the Vatican-affiliated Maronite was allowed an extra visit to the town he had to flee 47 years ago.

"My house used to be here, opposite the church. It's demolished. There were a lot of houses here," Josephides told AFP on Saturday.

Maronites first migrated to Cyprus centuries ago from Syria and Lebanon. Like other communities on the eastern Mediterranean island, they suffered from its turbulent history, the scars of which remain to this day.

Cyprus has been divided since 1974 when Turkish troops invaded and occupied the northern third of the island in response to a coup sponsored by the military junta then ruling Greece. 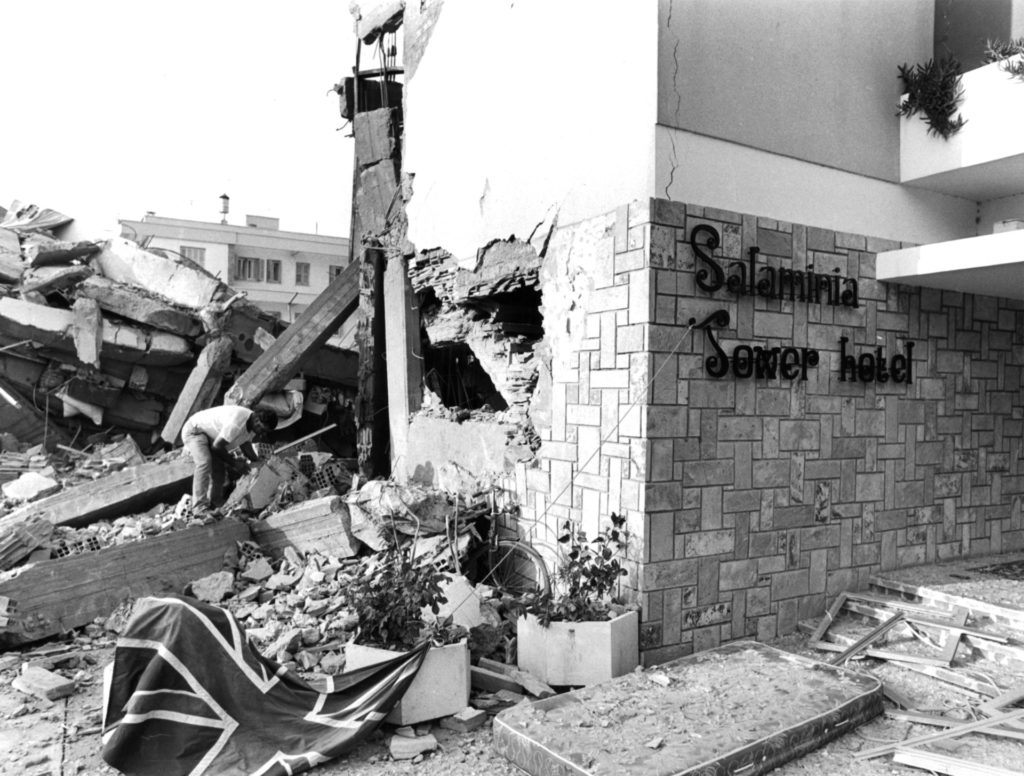 The Union Jack displayed outside the Salaminia Tower Hotel did not save it from attack by Turkish jets as they hammered Famagusta, Cyprus, 7/24/1974. (Photo by Express/Archive Photos/Getty Images)

The Republic of Cyprus, an EU member, controls the mostly Greek Orthodox south while the self-proclaimed Turkish Republic of Northern Cyprus (TRNC) is only recognised by Ankara.

An exception was made on Saturday as a gesture to Maronite Patriarch Bechara al-Rahi, who had come to Cyprus from Lebanon for the pope's two-day visit.

Around 50 people registered for the trip organised by the Maronite church. As they reached Agia Marina their cars were stopped by Turkish security forces in civilian clothes who searched their vehicles and checked identification. 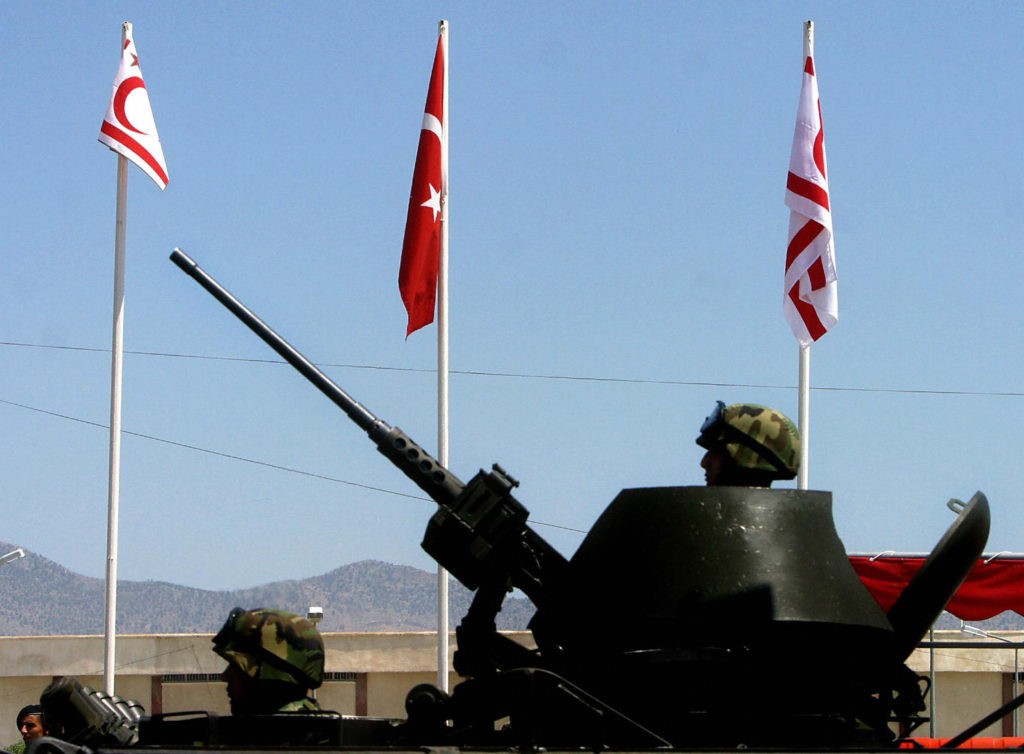 A Turkish tank rolls in front of a Turkish (C) and Turkish Cypriot flags during a military parade marking the 29th anniversary of Turkey's 1974 invasion which bisected the island, on the Turkish side of the divided capital Nicosia, 20 July 2003. (LAURA BOUSHNAK/AFP via Getty Images)

After the invasion, a military camp was set up in Agia Marina and some of the homes abandoned by the Maronites who fled south were occupied by Turkish troops.

The small Agia Marina church is one of the few buildings unused by the Turkish soldiers. On Saturday men in uniforms bearing the Turkish word for police mingled with the faithful inside.

A single bulb provided electricity as Rahi said he would keep lobbying in favour of the Cypriot Maronites. 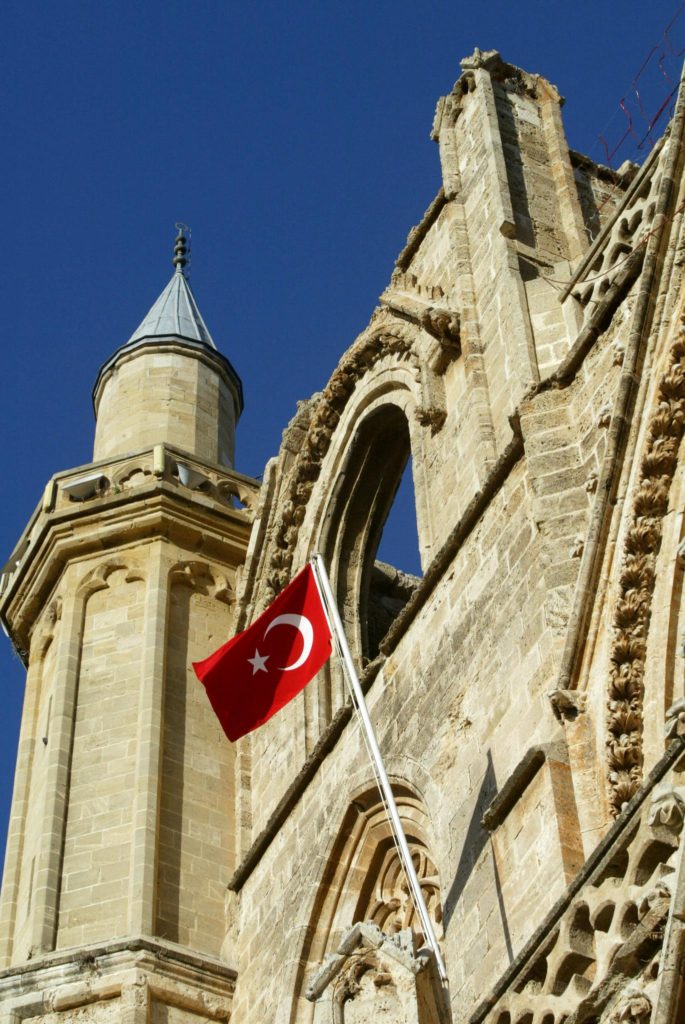 A Turkish flag is seen on the Lala Mustafa Pasha mosque, once the cathedral of Saint Nicholas, in downtown Famagusta, 13 December 2003. (Photo by TARIK TINAZAY/AFP via Getty Images)

Several rounds of UN-led talks to reunite Cyprus have resulted in failure, including the last failed attempt in 2017.

Saturday's tour also took in the village of Asomatos, just north of Agia Marina, where visitation rules are more relaxed.

Each Sunday, Maronite Cypriots are allowed back to attend mass but right after the service they must head back south again.

"I lived here from my birth till 1974. I got married here," said Maria Partella Stefani, 71. The invasion forced her to move south.

"My house (in Asomatos) was built three months before the invasion… now it is occupied by the commander of the army," she said. 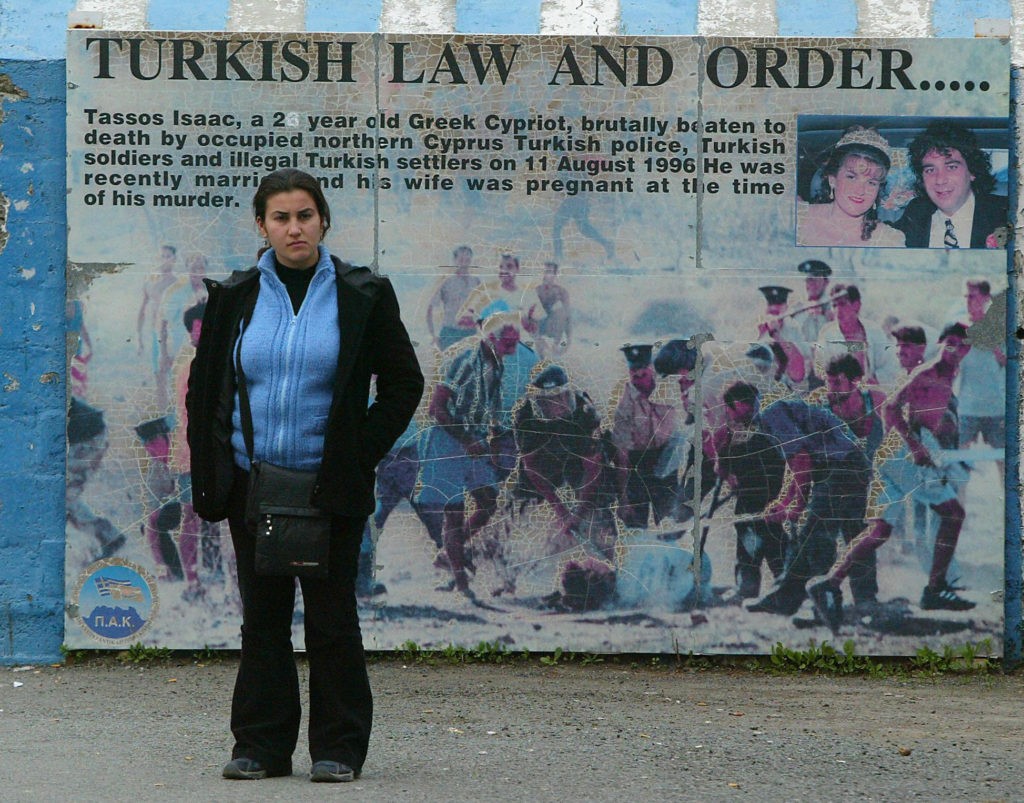 A Turkish Cypriot girl waits for friends in front of an anti-Turkish mural on the Greek side of the Green Line that divides the Cypriot capital Nicosia before crossing back home 10 February 2004. (LAURA BOUSHNAK/AFP via Getty Images)

Because of the coronavirus pandemic Stefani said she had not been able to visit her home village for a year.

"I'm very happy and sad today," she said, adding that her dream is to live permanently in Asomatos.

Her sister Annetta, also in her 70s, harbours the same dream of returning. "There's so much land here for us but we're (forced to be) away."

"If nothing changes, they will disappear altogether," said Bartelis Hajji Faisal, the mayor of Agia Marina who lives in the south.

Christians Long to Return to Stolen Homes in Turkish-Occupied Cyprus have 899 words, post on www.breitbart.com at December 5, 2021. This is cached page on TechNews. If you want remove this page, please contact us.