The metre-high trees with roots resembling an octopus’ tentacles can be appreciated in all their glory when the tide is out here in Gazi, a sleepy bay in southeastern Kenya.

“It can take up to 10 years for a mangrove plantation to grow,” explains Josphat Nguu as he inspects the green giants.

Nguu, a marine biologist, and his colleagues from the Mikoko Pamoja project are trying to reforest this area with mangroves again as well as to protect the ones that are already growing here in Gazi.

It’s a fight that’s well worth the time and effort: That’s because mangroves are a valuable weapon in the fight against climate change.

The trees, which have the rare ability to grow in salt water, store carbon dioxide in sediment, explains Herr. “They have sediment deposits that are metres thick in some cases,” she explains. 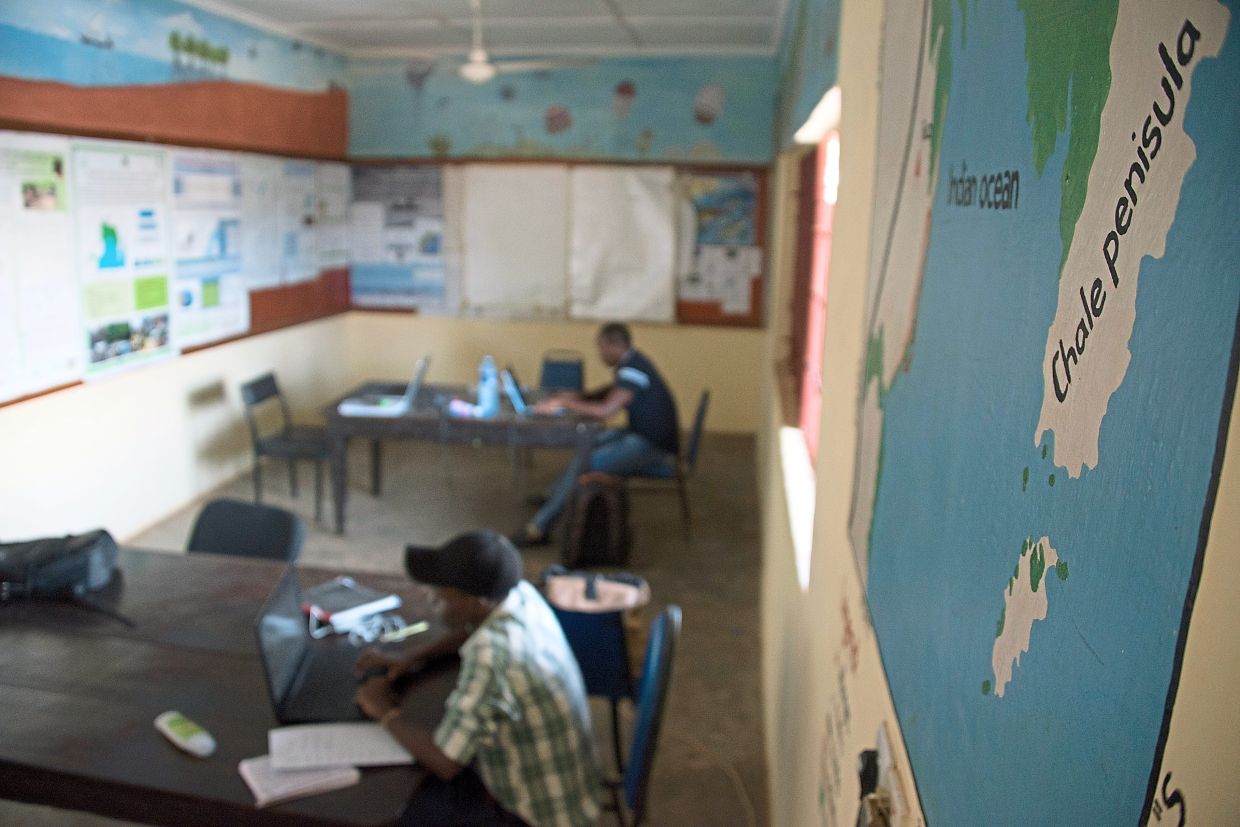 A map on the wall of the Mikoko Pamoja project office in Gazi, Kenya, that seeks to protect the country’s mangrove forests.

However, these unique trees are endangered: According to an IUCN report, mangroves have been cut down faster than any other forest species in the last half century. Since 1996, the global area covered by mangrove forests, about 146,000sq km, has decreased by about 6.6%, according to the report. This is largely due to mangrove forests – which are found in almost all warm coastal regions – being converted into farmland or ponds for aquaculture.

The situation in Kenya is especially worrisome, as 18% of the mangrove forests were lost in just a quarter of a century, between 1985 and 2010, finds the report. An issue is the fact that people here see mangrove as a source of wood, explains James Kairo, a lead researcher at the Kenya Marine and Fisheries Research Institute (KMFRI).

Residents in Gazi and other coastal areas in Kenya will fell the mangrove trees and use them as building material or for burning.

But beyond storing carbon dioxide, mangroves also have many other advantages, bringing tangible benefits to the residents in Gazi.

They protect against coastal erosion as well as possible future effects of climate change, such as rising sea levels. Mangroves also help provide better water quality and are home to many different types of marine life. 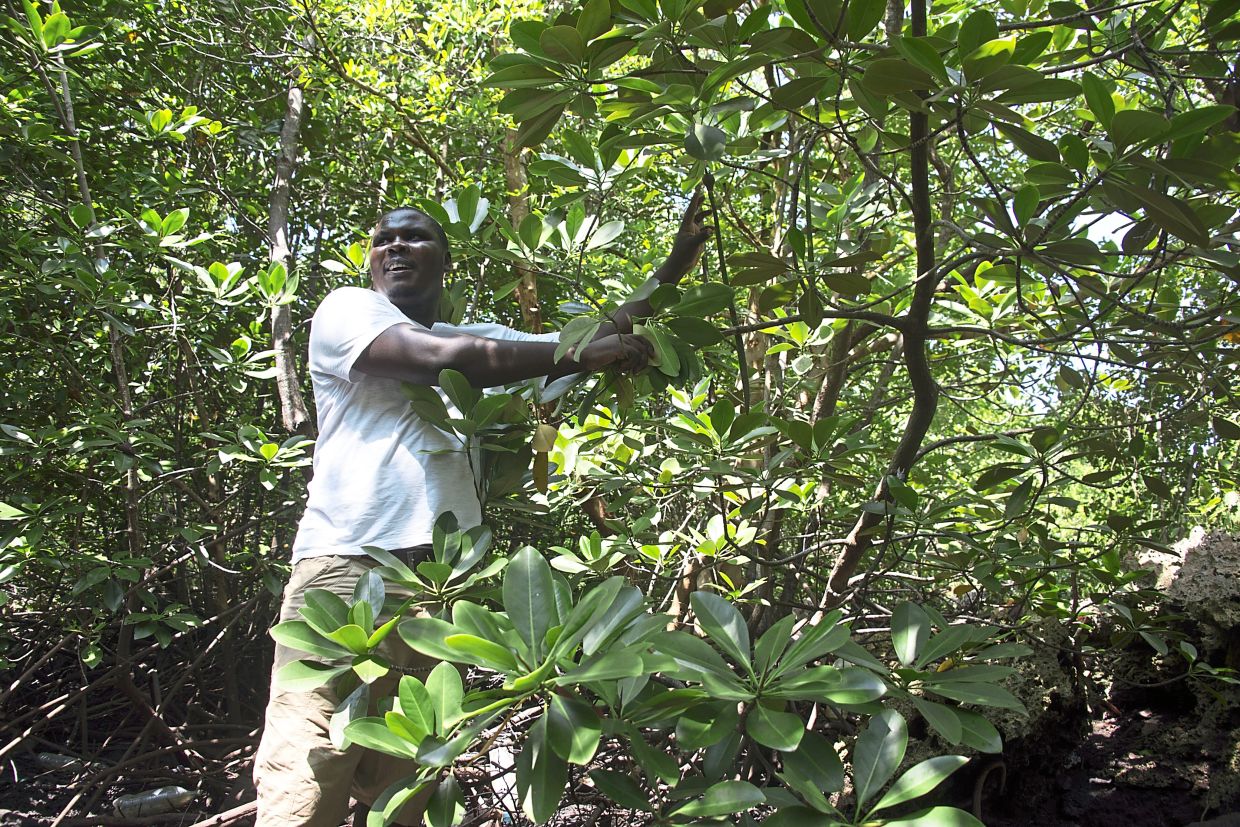 Mikoko Pamoja wants to do something about it. The project initiated by KMFRI and others in 2014 says that so far it has protected 117ha of mangrove forest and restored about two hectares. The project is financed by carbon credits bought by firms and people.

The project also attempts to get the community involved, with the goal of helping residents understand the advantages of mangroves.

Some of the proceeds are used to support hospitals, improve water supplies and promote educational projects. The project also aims to provide residents with alternatives to mangrove for building material and fuel, as well as to offer more efficient ways of cooking.

Mikoko Pamoja is a “global pioneer”, according to Herr. It’s one of the first mangrove projects worldwide to involve the community.

Herr is for the expansion and creation of initiatives aimed at protecting and reforesting mangrove forests.

However, she cautions that not all reforestation efforts are sustainable, and any project has to be sensitive to local conditions and bring in the community. And, warns Herr, mangroves aren’t a magic bullet against carbon dioxide emissions and climate change.

“Nature-based solutions alone will not be enough,” she says.

And above all, such projects require patience and perseverance. These qualities are familiar to Nguu. For him, it’s not just about the mangroves, but about Kenya’s entire ecosystem.

The 30-year-old was raised far from the ocean, in the heart of Kenya. His parents are farmers. He grew up near the Tana river, which originates in the centre of Kenya and flows into the Indian Ocean.

“I wanted to understand the connection between rivers and oceans,” he explains. And by protecting the mangroves, he’s also now directly protecting Kenya’s coast, and indirectly, the entire country.

Magic bullet against climate change? Saving mangroves in Kenya have 1101 words, post on www.thestar.com.my at May 22, 2021. This is cached page on TechNews. If you want remove this page, please contact us.