(CNN) It has now been almost six months since Covid-19 was declared a pandemic in the United States. For all researchers have learned, there’s still so much more to understand.

The key to moving forward is understanding where Covid-19 has spread around the country and what the science tells us about what to do next. What lessons can be applied in schools and universities? What can cities and counties learn from what others have already endured? Where are we in the search for treatments and a possible vaccine?
Here’s what’s clear so far about who is impacted by the virus, how the virus has been controlled, and where the global race for treatments and vaccines stands.

Who has been impacted

The human toll of the virus has grown by measures many could not imagine. When the pandemic first began little was known about who would be impacted and what factors might make people vulnerable. Those answers have shifted over time.
Read More
Where things stand: As of Monday, at least 183,000 people have died in the United States and more than 6 million have been infected, according to data compiled by Johns Hopkins University.
According to the CDC’s best estimate, the average person has less than a 1% chance of dying from coronavirus. In the months since the pandemic began, public health experts have learned a few key things about who is more likely to become seriously ill.
Why that matters: Leaders at all levels need to know who to protect and how best to protect them. Dr. Anthony Fauci, director of the National Institute of Allergy and Infectious Diseases has often repeated there are five things people can do to help stop the spread of the virus: Wear a mask, all the time, consistently, when you’re outside and may be exposed; keep physical distance; avoid bars, or, if you can, or close bars; keep away from crowds or congregations; maintain hand hygiene.
We are still seeing states struggle to contain rolling outbreaks of cases. As some states get their outbreaks under control, cases have risen in others. That’s in part a factor of proper measures are being taken, and if people are following the guidance.
To tackle this infection, the focus must be two-fold: protecting the populations most at risk and ensuring those who are younger understand the impact they have on keeping the disease from spreading.
Reducing transmission among all groups — even children and young adults, who are less likely to become seriously ill — can have a huge impact on protecting more vulnerable populations.

The state of testing

Where things stand: The United States has come a long way since its early struggles with testing for Covid-19, but that doesn’t mean there isn’t still a long way to go. While some major bottlenecks have cleared, there is still not the adequate easy, rapid testing that many public health officials say is needed to stay on top of this virus.
To diagnose Covid-19, there are two key types of tests available.
Why that matters : There are still rolling outbreaks in cities, counties and states or superspreader events. Quick and effective testing is needed for public health officials to isolate, track and stop transmission of the virus.
For many Americans, getting a coronavirus test has meant waiting several days — often too many days to make it worthwhile, according to public health experts. Waiting too long can mean you’ve missed the opportunity to isolate someone and stop them from spreading the virus at their peak of infection. Rapid testing is one of the key tools South Korea used to help stop the spread of the virus so quickly.
Which is why rapid tests, even if they aren’t as accurate, are so important. Experts say that being able to take rapid tests more often, makes up for the fact that they aren’t as accurate. For colleges to reopen, for example, students may need to be tested every two to three days and be able to get quick results within minutes or hours — and that’s in addition to continuing to wear masks, wash hands and keep their distance from others.
According to data from the COVID Tracking Project, the U.S. conducted a little over 4.7 million tests last week. While that might sound like a lot, that still adds up to fewer than 20 million tests a month, and it’s far less than the million-plus tests per day some public health experts say we should be doing.

Where things stand: There have been incremental advances strides with therapies for coronavirus. Three are approved and there were at least 270 active trials and 570 in planning stage for treatments as of August 31, according to the FDA.
Remdesivir , an antiviral, has been approved by the FDA to treat hospitalized patients with severe Covid-19. The drug must be administered intravenously.
Dexamethasone , a widely available steroid, has been found to help hospitalized Covid patients. One study found that it may be able to help the sickest in hospitals who require ventilation or oxygen. A low dose regimen for 10 days was found to reduce the risk of death by a third among those on ventilators or with oxygen. 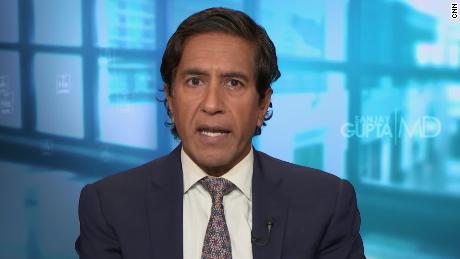 Dr. Gupta breaks down the effects of convalescent plasma

Dr. Gupta breaks down the effects of convalescent plasma 02:09
Convalescent plasma is the most recent Covid-19 treatment to be granted emergency use authorization by the FDA. It uses blood donated by people who have recovered from coronavirus infections. There’s hope for this treatment — it has been used to treat other deadly coronaviruses — but many health experts said it needed more studies that prove its benefit. Much of the data publicly available does not include randomized control trials, the gold standard in research. The data that has been shared shows those treated with plasma were often treated with other drugs, too, making it hard to know the impact of the plasma.
Monoclonal antibodies are currently being studied by several companies as a possible treatment for patients infected with Covid-19, and as prevention. Monoclonal antibodies are immune system proteins that specifically home in on a single target. In coronavirus, they are targeted to a single structure on the body of the virus. The hope is to slow, or even prevent, infection. The treatments can be expensive and difficult to manufacture, though.
As for vaccines, 33 are in human trials around the world as of August 31, according to the World Health Organization.
The US government’s vaccine development effort, Operation Warp Speed, is supporting eight vaccines, six of which have been announced. Operation Warp Speed’s goal is to have 300 million doses of a vaccine that’s safe and effective by January 2021.
Moderna : The vaccine developed by Moderna and the National Institute of Allergy and Infectious Diseases began Phase 3 trials in the United States in late July. Early results from studies of the the mRNA-1273 vaccine showed it brought about an immune response and a T-cell response in all age groups, which is what researchers wanted to see. The higher the dose, the higher the immune response was in the people who got it — but the side effects were worse, too. More than half of participants had side effects, including fatigue, chills, headache, muscle pain and pain at the injection site.
Pfizer/BioNTech: A vaccine developed by Pfizer and BioNTech also began Phase 3 trials in the United States in late July. The companies moved into a combined Phase 2/3 trial with their vaccine candidate, called BNT162b2. In the combined Phase 1/2 trial, the vaccine also induced both a T-cell and antibody response, a “double-arm” effect that the companies hope will provide longer protection. Preliminary data from the Phase 1/2 trial showed “a favorable overall tolerability profile” for the vaccine, Pfizer said in a news release, “with generally mild to moderate” side effects that lasted one to two days, “such as fever, fatigue and chills and no serious adverse events.”
AstraZeneca : A vaccine made by AstraZeneca and the University of Oxford launched its Phase 3 trial in the United States on Monday. Results from early trials released previously showed the vaccine prompted an antibody response within 28 days and a T-cell response within 14 days. Neutralizing antibodies — so-called because they can neutralize the virus — were detected in most participants after one shot, and in all of them after two. There were no serious adverse events related to the vaccine; fatigue and headache were the most commonly reported reactions.
More vaccines in the works: The Johnson & Johnson vaccine is expected to begin Phase 3 US trials in mid-September. Novavax’s vaccine is expected to begin US Phase 3 trials by the end of the September, and Sanofi/GlaxoSmithKline is expected begin Phase 3 later this year.
Why they matter: Until a vaccine is approved it’s important to note that of the treatments available, most are to be used in patients who are sick in the hospital. That leaves out a lot of people who are very sick with this disease, but perhaps not the sickest of all. In an ideal scenario, doctors would like to have treatments that can be used in all scenarios: for the sickest in the hospital, but also a treatment for people who are at home.
Think about flu season and how those who test positive are given an option like Tamiflu. It can be taken at home and help reduce symptoms and reduce the need to be at a hospital. A medication like that would also help Americans feel more comfortable about “resuming normal life.” But so far, treatments are limited to the sickest who are in hospitals, or those who are currently using oxygen or ventilation.
These treatments are the bridge or a stop gap until a vaccine is developed. And that won’t likely be until spring 2021, according to most public health experts.
A vaccine must first and foremost be safe, but it must also protect a wide swath of the population. That’s why its so important to have trials that include older patients and minorities. There’s been a discussion about both the importance of and the difficulty recruiting both of those groups. And that’s a concern. One bit of good news is there has been data from Moderna’s vaccine that shows an immune response in all ages and also no difference in symptoms across ages.

What we've learned about Covid-19 seven months after the first US case have 2163 words, post on edition.cnn.com at September 1, 2020. This is cached page on TechNews. If you want remove this page, please contact us.