When climate activists took over the office of long-time United States Democratic congresswoman (also former and likely future Speaker of the House) Nancy Pelosi on November 12, they were joined by the youngest member of the newly elected Congress.

“I am proud of each and every single one of you for putting yourselves and your bodies and everything on the line to make sure we save our planet, our generation and our future,” said New York representative-elect Alexandria Ocasio-Cortez.

Just two years earlier, Ocasio-Cortez was a 27-year-old bartender who joined the protest at the Standing Rock Sioux tribe camp to stop the Dakota Access Pipeline . She came away inspired to help bring change via election to the US Congress.

“My journey here started at Standing Rock, and it started with everyday people doing what you all are doing,” she told the protesters last week, before explaining the Democrats’ New Green Deal that would promote jobs while protecting the environment.

Ocasio-Cortez isn’t the only one to be politicized over a fossil fuel pipeline.

The #NoDAPL anti-pipeline movement at Standing Rock focused global resistance to change-inducing fossil fuels on the oil industry’s attempts to expand their flow.

From gas pipelines between Asia and Europe, to the web of infrastructure transporting high-carbon Alberta tar sands oil across North America, to pipes crisscrossing the Niger Delta and traversing the southern highlands of Mexico, local communities, environmentalists, social justice activists and indigenous rights movements — and sometimes armed militants — have been fiercely resisting pipelines.

“The combination of the trampling of the human rights of indigenous and local communities, the underplaying and ignoring of the local environmental impacts, combined with the fact that [for example] the tar sands are not compatible with a future that deals with climate change in any meaningful way,” has created a “perfect storm,” Kronick said. Though US President Donald Trump thwarted the Standing Rock protesters’ attempt to stop the fracking gas pipeline, pipeline protesters have also seen a number of victories.

Construction of the controversial Keystone XL and Trans Mountain pipelines, which ship crude bitumen across the US and the planet, have both been halted by federal court cases since August.

In the former case, decided on November 8, the judge said there had been a failure to take a “hard look” at the impact of the Keystone XL on global climate change, after Trump overturned his predecessor’s decision to stop construction.

‘Not here, not anywhere’

Europeans are also resisting gas pipelines to funnel Russian and Central Asian fossil fuels to the continent. The Nord Stream gas pipeline planned to run through the Baltic Sea has come under fire over its implications for local communities, the climate and marine life .

And in Italy, the so-called #NoTAP movement has emerged to stop planned construction of the Trans Adriatic Pipeline, the last stage of the Southern Gas Corridor reaching from Azerbaijan to Italy and part of the European Union’s strategy to reduce reliance on Russian gas.

NoTAP’s slogan is simple: “Not here, not anywhere.” Local activists in Puglia, through which the pipeline will arrive after crossing the Adriatic, fear their fish stocks and idyllic coastline will be vulnerable to spills. The pipeline also threatens 1,600 ancient olive trees which stand in its path.

Allegations of mafia involvement, money laundering and corruption leading back to the Azerbaijani regime are also feeding the resistance — NoTAP signs abound in Puglia. 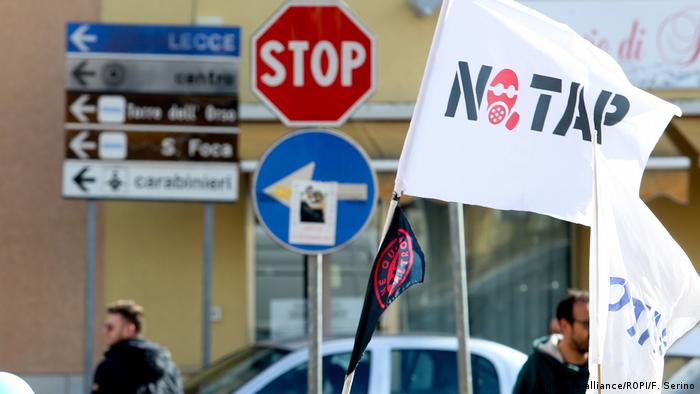 In March 2017, riot police clashed with protesters attempting to block the cutting of centuries-old olive trees for the pipeline. Some locals later received fines of up to €10,000 ($11,500) for protesting; others were banned from the area for three years.

As at Standing Rock, where protesters had been pepper-sprayed and reportedly attacked by police dogs, the view that state police are acting as the security arm of private corporations has further fired up protesters.

“You have a lot of human rights violations, and practices of criminalizing dissent,” Anna Di Ronco of the Department of Sociology at the University of Essex, co-author of a 2018 article on the #NoTAP protests and their use of social media, told DW.

The NoTAP protests, involving many olive oil producers who are among the poorest people in the country and perceive no economic benefit from the pipeline, began as more of a social justice than environment movement, Di Ronco said.

But in the wake of #NoDAPL, the anti-TAP movement also began to cite environmental arguments about climate change, tapping into a broader movement.

When pipelines do go in, protesters are increasingly resorting to sabotage.

In October, 2016 nine climate activists, the so-called “valve turners,” stalled the flow of tar sands oil from Canada to the US by accessing emergency valves in four states — and stopping 2.8 million barrels of oil from flowing, roughly 15 percent of daily US consumption. They were quickly arrested. “I’m just more afraid of climate change than I am of prison,” one activist said.

In a stunning victory, the charges against them were dismissed in October.

The symbolism of pipelines as the front line of the struggle against fossil fuels is a relatively recent phenomenon in the global North. But for Nigeria, the scene of arguably the world’s most militant anti-pipeline activism, the war has been ongoing for decades.

In 1995, renowned writer and activist Ken Saro-Wiwa was hanged by the Nigerian government for his involvement in non-violent resistance to environmental damage and human rights abuses connected to oil extraction in his native Ogoniland.

The armed Movement for the Emancipation of the Niger Delta (MEND) are said to have started sabotaging and destroying crude oil pipeline run by the likes of Royal Dutch Shell and Chevron in the mid-2000s. Their action intensified after Royal Dutch Shell’s 55-year-old pipeline spilled millions of liters of crude oil into the Niger River Delta in 2008 and 2009.

MEND’s militancy has been carried on by the Niger Delta Avengers , who have dynamited oil facilities and apparently cut flow by up to 50 percent.

For Ocean Hyland,  a 22 year-old Tsleil-Waututh Nation activist and artist from Canada’s British Columbia province, the battle against the Trans Mountain Pipeline expansion is the latest front in a generations-long struggle against the abuse of her people’s land.

But now, climate change has given that fight global resonance.

“Industrialization poisoned our home, and we spent 40 years repairing that damage,” Hyland said at a  protest against Barclays bank’s funding of the pipeline. Only two years ago, her people were able to safely eat clams harvested from the inlet again, she continued. “A tar sands pipeline will increase oil tanker traffic in the inlet seven-fold, and put our inlet and all of our work at risk.”

From publishing an op-ed in Teen Vogue in March, to travelling to London in July for the protest against Barclays, Hyland is symbolic of the young people driving the anti-pipeline movement globally.

Advocating for divestment from fossil fuel companies, the #ProtectTheInlet movement is demanding a transition to green energy and alternatives to pipelines — including solar projects in the middle of the tar sands. 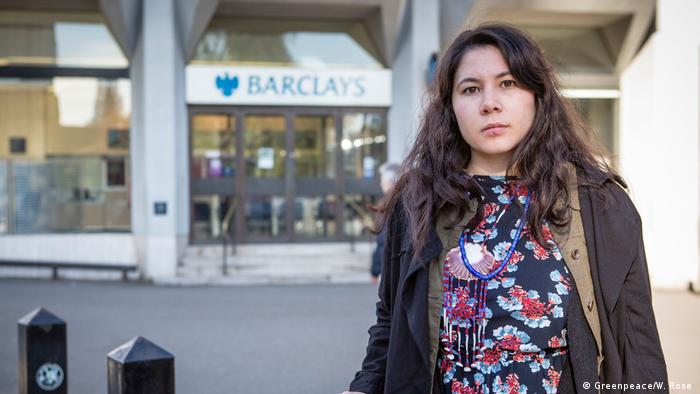 The fossil fuel industry is justifiably concerned about all the anti-pipeline activism.

“Anti-energy groups are increasingly targeting pipeline projects, spreading misinformation about purported environmental hazards to incite citizens and elected officials, and using social media to quickly get the public on board with their agendas,” Jim Sisco, president and founder of energy advisers ENODO Global, told oil and gas industry publication Rigzone .

The industry — and the politicians that back these projects — argue that they bring economic benefits. But protesters in the communities they run through feel a very long way from the profits reaped from fossil fuel trading and power generation.

Rising star Alexandria Ocasio-Cortez is determined to use her political office to stop a hazard that her generation believes is very real.

And whether the fossil fuel industry likes it or not, the fight may have only just begun.

Pipeline wars: Front line in the fight against climate change have 2279 words, post on www.dw.com at January 20, 2018. This is cached page on TechNews. If you want remove this page, please contact us.